Story
St. Petersburg outscored visiting Nizhny Novgorod by 11 in the 4th quarter to come away with a three-point win, 92-89. Zenit forward Sergey Karasev, who was named January MVP before the game, only scored 10 points on 3-8 shooting, but Evgeny Voronov compensated with a season-high 23 points and Kyle Kuric chipped in with 19.

Shaky free-throw shooting down the stretch doomed the visitors. After allowing Zenit to take a four-point lead, 88-84, with two minutes remaining, Nizhny Novgorod went 5-10 at the line, helping St. Petersburg hold on for a comeback win.

Despite struggling most of the game, Karasev came up with two of the biggest buckets, twice extending Zenit’s lead in the closing minutes (90-87 and 92-88).

For most of the contest, Nizhny Novgorod was in the driver’s seat. The visitors looked nothing like a 3-8 club, scoring 52 points in the first half en route to a four-point lead. They built on the advantage in the 3rd quarter with defense and 10 points from leading scorer Stevan Jelovac (24 points overall).

Trailing 73-65 entering the 4th, Zenit was led by Voronov for most of the period. The Russian journeyman poured in 11 points on a mix of free throws and layups to knot the score at 82-82 with under four minutes to go. Karasev and Kuric took over the rest of the way, scoring St. Petersburg’s final 10 points in the win.

Quotes
Nizhny Novgorod head coach Zoran Lukic:
– I very rarely do this, but today I want to congratulate my team on the way they played against a worthy opponent. Once again, however, our mistakes sank us today. We need to keep working on them. We’ve made significant progress over the past two months, but we’re still missing a little something to beat this caliber of team. 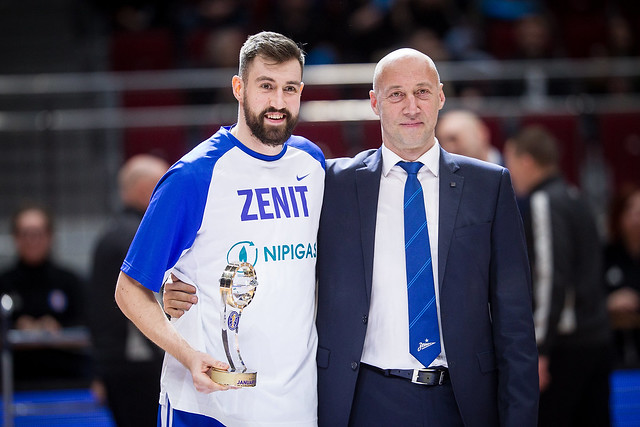