Both teams played exactly the way fans have come to expect this season. Zenit roared to a 9-0 lead in the first 70 seconds and went up by as much as 15 in the opening period. Codi Miller-McIntyre led the way, scoring and distributing:

Astana came back twice. At the start of the 3rd quarter, the visitors erased their early deficit and even took the lead. Zenit went back up by eight in the 4th quarter, but Astana was able to force overtime.

The extra period was a different story. Emil Rajkovic’s men ran out of steam for good, allowing Zenit to take over 5th place in the standings.

Comeback of the week

Sergey Karasev missed more than a month with an injury, but in his first game back he tossed a beautiful alley-oop to Jalen Reynolds:

Kalev carves out 7th place in the standings

Kalev was one of the hottest teams in the League in April. Tallinn won four of five down the stretch, defeating three teams in the top-five. By finishing the season with seven wins in nine games, Kalev not only clinched its first-ever playoff appearance, but also beat out Nizhny Novgorod for 7th and avoided a first-round match-up with CSKA in the process.

The Estonians needed a win over Lokomotiv-Kuban at home to finish ahead of Nizhny Novgorod. The visitors sat several starters and Kalev took advantage. Tony Wroten was one of the keys to the victory:

In an interview that came out the same day, Wroten warned fans not to underestimate Kalev in the playoffs:

Krasnoyarsk was eliminated from the playoff hunt more than a week ago, but the Siberians refused to give up on the season. Thanks to two wins this week, Enisey was able to secure 9th place.

On Wednesday, Krasnoyarsk ended Khimki’s 2nd-place hopes by beating them on the road. The home team led most of the contest, going up by as much as 14 points. But D’Angelo Harrison was unstoppable in the 4th quarter, leading Enisey to a phenomenal comeback win.

The win was Enisey’s second-ever vs. Khimki. Krasnoyarsk’s first victory also came on the road, four years ago.

Despite the success in Moscow Region, Enisey still risked dropping to 11th place, which meant it needed to beat Avtodor in the final game of the season. Enisey trailed by as much as 11, but adjusted to Saratov’s brisk pace and closed out the year with an exciting win at home.

Enisey took 9th place as a result, while Avtodor slipped all the way to 11th, behind VEF Riga.

Unlike Tsmoki and Zielona Gora, VEF has played its last game of the season. While the Belarusians and Poles await their domestic league playoffs, Riga is completely finished, placing second in the Latvian-Estonian league’s Final Four after a loss to Ventspils in the championship.

The home game vs. Lokomotiv decided very little for VEF. A win meant a 10th-place finish, a loss would mean 11th. Krasnodar, which was enjoying its final warm-up before the postseason, led at halftime. Dmitry Kulagin was on track for a triple-double (five points, five rebounds, six assists) and the visitors looked like they would cruise to victory.

Instead, VEF tightened up the defense in the paint and held Krasnodar to only 24 second-half points to celebrate its first win over the Railwaymen since 2015.

UNICS and Nizhny are both probably focused on the postseason already. How else could you explain their sluggish starts on Sunday vs. teams outside of the playoff zone?

Tsmoki had a chance to escape last place and scored the first nine points in Nizhny Novgorod. The Belarusians led by as much as 13 in the first half. During the break, Nizhny hit the reset button, clamping down on defense to answer Minsk with a 19-0 run! Vladimir Dragicevic sparked the comeback and finished with 27 points and seven rebounds. Tsmoki simply had no answer.

UNICS also trailed by 13 points in Poland, but managed to turn things around and take a win back to Kazan. Notably, Pierria Henry played, returning after a month-and-a-half-long absence to dish out seven assists in 19 minutes.

For the first time in VTB League history, someone won back-to-back scoring titles. Alexey Shved averaged 22.8 points per game for Khimki, beating out second-place Arnett Moultrie of Kalev by almost three points (19.9). Last season, Shved was also the top scorer at 23.6 points per game. His closest competition, coincidentally, was Isaiah Briscoe of Kalev (22.0). 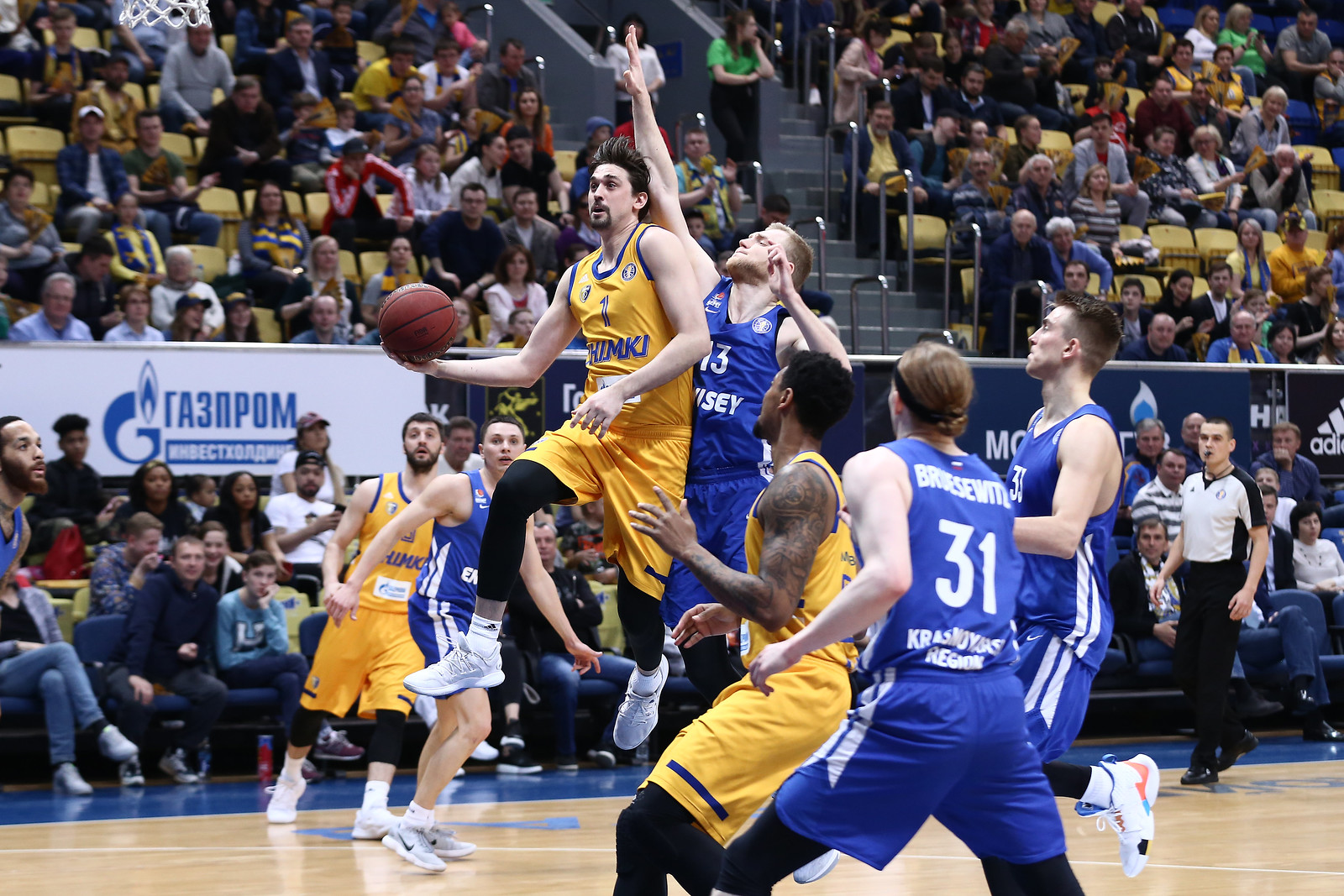 Codi Miller-McIntyre scored 20 points to go with seven rebounds and five assists vs. Astana, helping Zenit regain 5th place.
Tony Wroten recorded 24 points and five assists vs. Loko as Kalev took 7th place.
D’Angelo Harrison finished the season with a ridiculous double-double, 34 points and 12 rebounds, and destroyed Khimki’s 2nd-place hopes.
Jabril Durham led the way in VEF’s win over Lokomotiv, leading the way with 15 points and six rebounds in Rigal’s final game of the season.
Nizhny Novgorod completed the comeback vs. Tsmoki-Minsk, rewarding the home fans with a win as Vladimir Dragicevic poured in 27 points to go with seven rebounds.