Everything you need to know about the previous week in the League: Avtodor comes up a little short in Krasnodar, CSKA handles Zenit, Enisey keeps its playoff hopes alive.

Avtodor Saratov did almost everything necessary in Krasnodar to make up for past mistakes and finally knock Kalev out of 8th place. Evgeny Pashutin’s men were terrific on offense for the first 35 minutes and didn’t forget about defense either:

Avtodor went up by 10 points in the 4th quarter and David Kravish seemingly put the game away with another dunk. Instead, Loko came alive, storming back courtesy of Dorell Wright’s sharp shooting:

The game appeared headed to overtime, but two outstanding defensive possessions leading to back-to-back Kulagin dunks helped Krasnodar put the game away and avoid a second-straight loss to Avtodor at home:

Lokomotiv point guard Dmitry Khvostov suffered a serious knee injury against Khimki. The guard already had an operation in Italy. Now he faces a lengthy rehab before he can return to the court.

During the game vs. Avtodor, the Krasnodar fans lit up the #хвостдержись (#hangintherekhvost) hashtag, supporting their point guard on social media. There was also plenty of support for Khvostov at the arena itself: 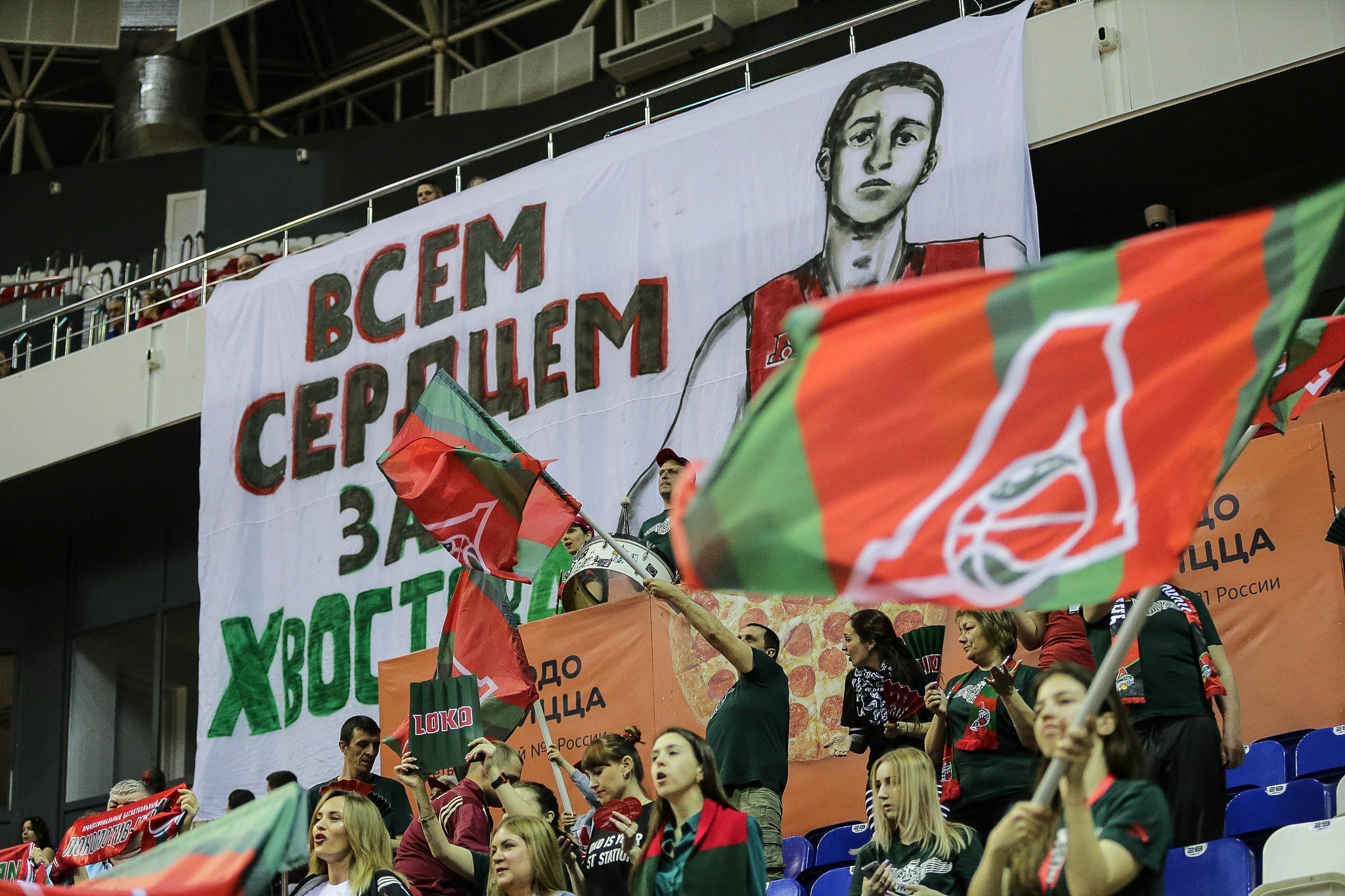 CSKA stops Zenit with a record number of 3-pointers

Prior to visiting Moscow, Zenit was tied with Khimki for longest winning streak in the League at four games. But the home team showed it was determined to break that streak from the opening minutes:

The Army Men increased the lead each quarter, going up by as much as 24 points, though the final score was much closer: 83-73. The main reason for CSKA’s success was the barrage of 3-pointers. The Army Men attempted 31 from beyond the arc, knocking down 16. That’s a season-best for CSKA and 4th-most in the League this season.

“The reasons for our defeat were our poor three-point percentage–we started 1-12 or 1-14–we didn’t earn many free throws, which speaks to a lack of aggressiveness in the paint, and we didn’t move the ball well enough.” Joan Plaza was honest about his team’s problems at the post-game press conference.

With the loss, Zenit trails Lokomotiv by one game for 4th place and let Astana sneak into 5th.

Thus, it was no surprise that several other players stepped up in their absence. Veterans Evgeny Baburin and Chris Czerapowicz combined for 36 points, shredding the CSKA defense all night:

Unfortunately for the home fans, that wasn’t enough to beat the reigning champions. CSKA returned to Moscow in a good mood. The Army Men have only one regular-season game remaining–Astana on Thursday–but Moscow does not control its fate. If UNICS wins out, CSKA will have to settle for 2nd place.

UNICS could win the regular season, but can’t afford any setbacks, assuming the Army Men take care of business vs. Astana later this week. Dimitris Priftis’ men passed the first test in Estonia with flying colors.

Kazan did not seize control immediately, however. Kalev was desperate to win also as it hunts for a first-ever playoff appearance.

But Kazan was able to slow down the home team in the second half, while continuing to cruise on offense. UNICS finished with a season-best 107 points in the victoryu.

Errick McCollum was the biggest reason for Kazan’s fireworks. Back from injury, the guard scored a career-high 33 points, shooting 12-13 from the field, including 5-5 from beyond the arc:

Five straight losses in February and March seemingly buried Krasnoyarsk’s playoff hopes. But Enisey has now won two in a row to pass VEF in the standings and close the gap on Avtodor. The two teams have an identical number of losses, while Oleg Okulov’s club has a game in hand. In order to pass 8th-place Kalev, of course, Enisey will need a little help, in addition to a strong finish.

On Thursday, Enisey hosted Tsmoki. The Belarusians are looking to escape last place and played Krasnoyarsk even most of the game, but ultimately came up short. Krasnoyarsk was led by D’Angelo Harrison, who recorded a career-high 33 points in the win:

The upcoming game vs. VEF is huge for Enisey. If Riga comes out on top, Krasnoyarsk’s playoff chances will virtually evaporate.

Khimki is closer and closer to clinching a spot in the top three. On Monday, Moscow Region defeated Zielona Gora, scoring over 100 points for the second time this season. Alexey Shved found himself in the unusual role of set-up man, dishing out seven assists in the 1st quarter alone. He finished with a career-high 15 dimes to go with 10 points. Shved was only three rebounds shy of a triple-double.

The best play of the game belonged to Jordan Mickey, who threw down on the Polish center:

This was a special game for two Khimki players: Sergey Monia made his 500th appearance in a Yellow and Blue uniform, while Alexey Shved recorded his 200th. A few days before traveling to Khimki, the League rookies were in Perm where they picked up a long-awaited win. Zielona Gora trailed by 15 points after the 1st quarter, but shifted the momentum in the second half and won going away, 92-72. The Poles dished out 24 assists in the process, the team’s 3rd-best mark this season:

The win over PARMA ended a seven-game skid for Zielona Gora. The Polish club’s last win in the League came in early February.

Zielona Gora has almost clinched 12th place in the standings. PARMA would need to win at least two of its final three games to pass the Poles, which is not likely with games vs. Kalev, UNICS and Khimki on the schedule.

Alexey Shved records a career-high 15 assists and nearly gets a triple-double vs. Zielona Gora.

Dorell Wright brought Loko back vs. Avtodor via the perimeter (six 3-pointers), and Dmitry Kulagin delivers a win with a couple of late dunks.