Russian forward Vladislav Trushkin was one of the heroes for Zenit in the quarterfinal series vs. Lokomotiv-Kuban. In an exclusive interview with VTB-League.com, he praises the fans and Zenit’s staff, explains what made him so upset in Krasnodar, and also shares his favorite Spleen song.

– How are you feeling after the series with Lokomotiv-Kuban?
– Amazing! We were really motivated to play Loko. First of all, we lost to them twice in the regular season by more than 50 points combined. Second, we also didn’t forget the poster fans brought to the Basket Hall, which read “Hunting Season Open.” As our captain put it, now they need to switch the Lion’s head for Zubastik’s.

– Did the team already meet its goal for the playoffs?
– There wasn’t a concrete goal. We’re taking it game by game. The playoffs are unpredictable. Every game brings surprises. It’s good we could finish the series in four games. Now we have time to catch our breath and prepare better for the semifinals.

– What was the most difficult part about the previous series?
– Beating Lokomotiv-Kuban three times, because Krasnodar has a really talented group of players. I think the series was very interesting for the players and the fans. The short breaks between games were also a challenge. Recovering and preparing something new for the next game with so little time was not that easy. 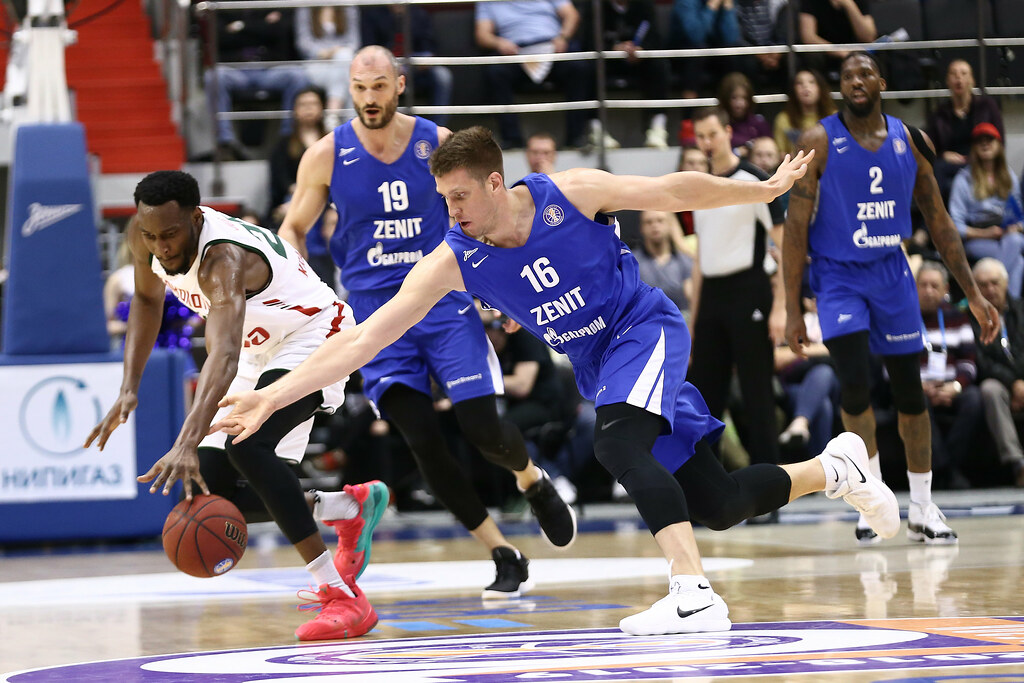 – Team leader Jalen Reynolds was on the bench a lot during crucial moments of the series with Loko. Is he injured or was that Joan Plaza’s decision?
– Thank God, none of the players on our team have any injuries. That was exclusively the coach’s decision. Joan Plaza sees the game his way and knows best who should play. As we can see, the coach was right and did his job.

– Your next opponent is CSKA. What can Zenit do to make the series competitive?
– There’s no secret answer. You can compete with anybody if you give 100% on the court and battle for every ball. I think that we can do it if we show an incredible desire to beat CSKA. Especially since we’ve already defeated the Army Men this season.

– You’ll play the semifinal games in the Yubileyny. Zenit has won its last three games there vs. CSKA…
– The arena doesn’t really matter when you have fans like we do. It was really nice that more fans came to games in St. Petersburg than did in Krasnodar. That’s a huge credit to our marketing team. The team has done an amazing job to draw fans. And we really want to reward those fans.

– Does St. Petersburg have the best fan support in the VTB United League?
– It’s one of the best! I also have to give credit to the fans in Kazan and Krasnoyarsk. When I played for UNICS and Enisey, we always had great support at home games.

– Do a lot of friends and acquaintances come to the games to support you?
– Quite a few. I have a lot of friends in St. Petersburg. Friends from the Superleague also come. Recently, a guy I played with in Vidny came to a game. I really appreciate the support. At the same time, it’s extra motivation for me.

– Right now, you’re the best Russian player on the team. What’s the secret to your development?
– I wouldn’t call myself the best. Look at how our captain Evgeny Voronov played in the series with Loko and the enormous amount of dirty work he did over all four games. The stats don’t always demonstrate a player’s value and contributions. Evgeny Valiev and Anton Pushkov also deserve credit. They did a great job against Moustapha Fall, who was significantly taller and heavier than both of them.

My success has a lot to do with Joan Plaza. I want to thank him for his support and trust. After getting ejected in Game 2, I didn’t expect to play much, but ultimately Plaza had me start in both home games and gave me nearly 20 minutes on the court.

– Is Joan Plaza the best coach you’ve played for in your career?
– He’s definitely one of the best coaches I’ve had a chance to work with. He’s a wonderful psychologist and strategist. I’m very grateful to him for giving me playing time. But I shouldn’t forget my other bosses: Dimitris Priftis, who’s enjoying a second-straight excellent season with UNICS, Oleg Okulov, who gave me an opportunity in the VTB United League and Vasily Karasev, who worked with us at the start of the season. I tried to learn something new from each of these coaches. I’m very grateful to them.

– There’s a 12-day break between the quarterfinals and semifinals. Is that good or bad?
– Time will tell. I think our coaching staff will do a good job scheduling workouts and making sure we’re not worn out, but also in shape and ready to play our best against CSKA. There are some other positives, too. During this time we can fully recover and enjoy the EuroLeague Final Four, and give the fans something to look forward to with more VTB United League games.

– Who are you going to root for at the EuroLeague Final Four?
– I’m rooting for exciting basketball. If CSKA plays well, I’ll support them.

– Do you like the rainy spring weather in St. Petersburg?
– Oddly enough, yes. St. Petersburg has become very dear to me in the last year. For example, after the two games with Loko in Krasnodar, I couldn’t wait to get back to St. Petersburg. I love living here. I never get tired of the city’s beauty: the canals, bridges, architecture. I’d love to stay here for a long time.

– Recently, you were at a Spleen concert. Doesn’t it seem like their music fits the weather in St. Petersburg?
– Not every Spleen song is depressing. For example, I really like the song “Ves etot bred.” It’s about life. You’ve got to listen closely and catch the meaning! Besides, your mood  can affect how you hear songs. Sometimes, people take something positive from depressing lyrics.

But really I like listening to anything. It depends on my mood and how I’m feeling. I can listen to Leningrad with their endless parties and carousing. Then I get sad and stuck in my feelings at a Spleen concert. Variety is good for you.