Story
VEF picked up another win on Sunday, taking down Avtodor at home for its fifth-consecutive victory. Mareks Mejeris was magnificent, scoring 26 on 11-13 shooting as the home team limited Avtodor’s high-octane offense to only 78 points.

Both teams desperately needed a victory with a little more than a month remaining in the season. Avtodor was coming off a loss to Zenit, but had a chance to catch Kalev for 8th place with a win and some help from Khimki.

After a close first few minutes, Arturs Ausejs gave VEF the early momentum, draining back-to-back triples to put his team ahead by eight, 22-14.

Trailing 30-21 late in the 1st quarter, Avtodor recovered with a 9-0 run, capped by Anthony Ireland’s triple early in the 2nd.

VEF, however, kept the tempo in check and gradually rebuilt its lead, taking a five-point advantage, 47-42, into the break.

The turning point came late in the 3rd quarter. With Avtodor continuing to hang around, Ausejs and Glenn Cosey combined for 14 points to stretch VEF’s lead to double-digits, 70-60, entering the 4th. Ausejs, who finished with 15 points, knocked down three 3-pointers during the run, scoring all of his points from beyond the arc.

The rout was on in the 4th quarter as VEF got a taste of its fifth win. Mejeris scored nine of his game-high 26 and the Latvians led by as much as 15 to close out the victory.

The result in Riga further complicates an already-tight playoff chase. Coupled with Kalev’s loss to Khimki, only one and a half games separate 8th-10th place in the standings: Kalev (9-11), Avtodor (8-12), VEF (8-13).

Dunk of the Night

Stat
5 – VEF boasts the longest winning streak in the League at five games. Next up: 7th-place Nizhny Novgorod on the road and another chance to muddy the playoff picture even further.

Quotes
VEF head coach Janis Gailitis: “We did a good job on offense in the first half, but lost the rebounding battle. After halftime, we got better. In the end, we played good team basketball, while several players put up excellent individual numbers. But the main factors for our success were our defense and play on the glass. Congratulations to the team on an important win!”

Avtodor head coach Evgeny Pashutin: “VEF is a very good team with dangerous snipers. We tried to minimize the number of times they shot from the perimeter and slow the tempo. In the 1st quarter, we failed, but then we made adjustments and cut into the deficit. But VEF was able to pull away again and we didn’t have strength for a second comeback. Our issues are on defense. In order to compete for a playoff spot, we need to become better in that area.” 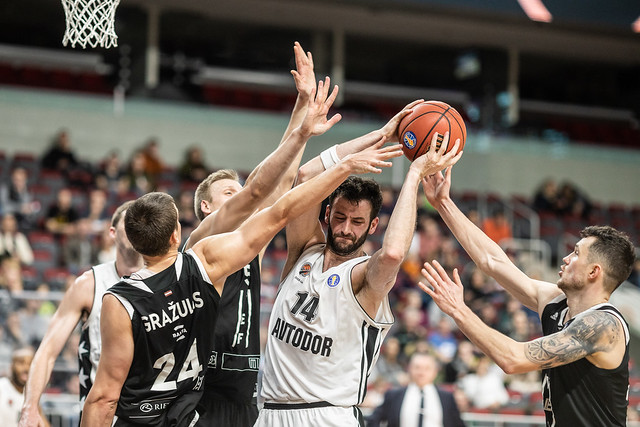