Story
Janis Timma completed Khimki’s miracle comeback in regulation with a dagger 3-pointer and the visitors went on to win by four in overtime, 97-94, behind 34 points from Alexey Shved.

Nizhny Novgorod was on the verge of forcing a three-way tie for 5th place and completing a season sweep of the Yellow and Blue. Playing without guards Ivan Strebkov and Kendrick Perry, Georgy Zhbanov completed his incredible run with another near triple-double (12 points, 10 rebounds, eight assists), while Vladimir Dragicevic poured in 25.

But a pair of Jordan Mickey free throws and an Alexey Shved 3-pointer sliced the deficit to six in a matter of seconds.

Despite perfect free-throw shooting down the stretch from the home team, Khimki continued to claw back by forcing multiple turnovers. Trailing by three, 83-80, with less than five seconds remaining, the Yellow and Blue executed a perfect in-bounds play to find an open Janis Timma, who drained the game-tying triple.

Evgeny Baburin had a chance to win it for Nizhny at the buzzer, but his 3-pointer missed, sending the game to overtime.

The extra period went back and forth with five lead changes, but Khimki ultimately came out on top by holding the home team to only two points in the final two-plus minutes.

Fittingly, Shved and Jordan Mickey hit the final three free throws to clinch the win. Together with Timma, the trio combined for an astounding 76 of Khimki’s 97 points.

Khimki clinches 3rd place with the victory at 17-7. Nizhny drops to 13-11, missing a chance to tie Zenit and Astana for 5th place.

Stat
16 – Khimki trailed by as much as 16 in the 4th quarter before coming back to force overtime.

Quotes
Nizhny Novgorod head coach Zoran Lukic: “This was a really unfortunate loss. To lead by 16 points and lose the game… It’s hard to describe my disappointment with how one of our players played and the chaos he created on the court in the 4th quarter. I’m disappointed that he couldn’t follow instructions out of the timeout. In the end, it’s my fault, since I put him on the team.

Bravo to Khimki. They fought to the end. They used all of our gifts. Nothing that we didn’t expect or know about them already happened. Unfortunately, games like this happen.”

Khimki head coach Rimas Kurtinaitis: “I’m happy about this tough win. Our team always has trouble in Nizhny Novgorod. No matter our opponent’s roster or their injuries, it’s hard to play here. Today’s game proved that. I’m not happy about our team’s energy, especially at the start of the game. We only played with the necessary desire in the final five minutes of regulation and overtime. I’m happy that was enough to win.

The team is out of rhythm a bit right now, since we haven’t had a full seven days to prepare most of the season. We had three games in a week sometimes. The new schedule is unusual for us. That’s why we came out lazy and turned the ball over 20 times, which hadn’t happened in almost two months. It’s good that the guys came together and showed their character when it mattered.

At the same time, I’d like to give Nizhny Novgorod credit. I’ve always been impressed by coach Lukic and his teams. No matter the roster, his guys play at 150% and don’t worry about the opponent.” 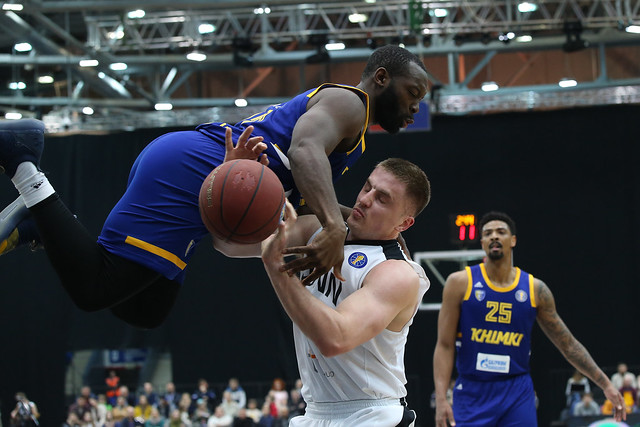