Story
PARMA entered Friday on a 10-game losing streak. After letting one slip away last week vs. VEF, Perm was determined to salvage a win at home and reward its loyal fans.

It wasn’t easy. Enisey’s Artem Komissarov drilled a 3-pointer at the end of regulation to force overtime and PARMA only managed to shoot 53% from the free-throw line (16-30). But in the end, PARMA poured in 17 points in overtime to guarantee its first victory since December 16.

Eigirdas Zukauskas, who finished with a team-high 20 points, was the hero down the stretch, pushing PARMA’s lead to six, 85-79, with less than two minutes to go on a 3-pointer and layup. He finished with seven in the extra period.

Enisey was fighting for its postseason life and gave PARMA everything it could handle. In a game that featured 18 lead changes, Krasnoyarsk entered the 4th quarter on top by one and battled the home team tooth and nail in the final minutes.

Denis Zakharov scored 19 for Enisey, including a dunk with 4:30 remaining in the 4th quarter that gave the visitors a 68-67 lead.

PARMA quickly regained the lead via Rashard Kelly, but Enisey hung around and ultimately was able to force overtime with Komissarov’s triple, assisted by Zakharov.

The home team had a chance to win the game at the buzzer, but Ken Brown’s three was off the mark.

PARMA led from start to finish in overtime, sparked by Zukauskas and Brown, and hung on for its 4th victory.

Enisey’s loss drops them to 6-13 with only seven games remaining. The Siberians need a miracle to re-enter the playoff hunt now.

Stat
10 – PARMA managed to end a 10-game losing streak. This was also Viacheslav Shushakov’s first victory as head coach in the VTB League this season.

Quotes
PARMA interim head coach Viacheslav Shushakov: “A huge thank you to our fans. They show up no matter the circumstances and were waiting for this win.

It’s important the team understands this and that the players compete not only for minutes or points, but also want to play well in front of their fans. Today, the team had good energy and we battled for this win for all 45 minutes. During the game, our defense was solid, but if we had avoided a few simple mistakes, we might have put the game away much earlier. Those mistakes ended up forcing us to overtime.”

Enisey head coach Oleg Okulov: “Congratulations to PARMA on the win. They played well, especially in overtime. We played poorly which is why we lost.” 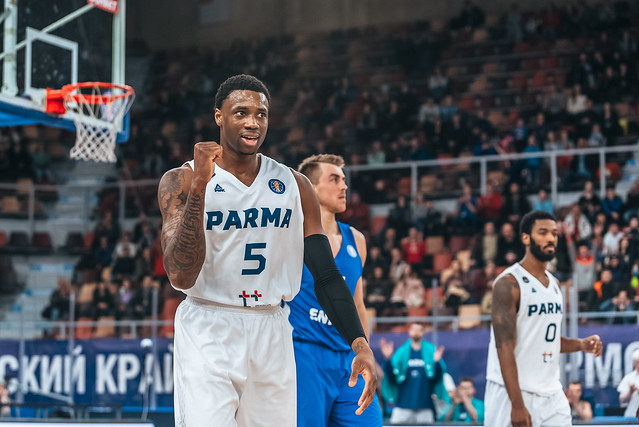