Story
Khimki (14-5) is competing for 2nd place, while Astana (13-7) entered the game with only one fewer win. The first half was evenly contested. Khimki was more effective inside the paint (26-12). Astana did most of its damage beyond the arc (9-18).

The two teams entered the break with Khimki leading 49-46.

The 3rd quarter featured more of the same as neither side was able to gain a commanding lead. With 10 minutes to go, the home team remained on top, 67-64.

Turning Point
The early minutes of the 4th quarter were not pretty as both teams missed shots and threw the ball away. Khimki was the first to regain control. Stefan Markovic and Janis Timma sparked a 10-0 run that put Moscow Region on top, 84-75. Astana was never able to respond, finishing with only 16 points in the final period.

With the victory, Moscow Region trails UNICS by only one game. Astana dropped to 6th place with the loss and now needs to contend with a hard-charging Nizhny Novgorod (half a game back at 12-8).

Stat
15 – Khimki’s edge on the glass (42-27). Rimas Kurtinaitis identified rebounding as Khimki’s biggest problem this season when he took over the club. Playing against the League’s second-best rebounding team, the Yellow and Blue showed remarkable progress in that area.

Star
Alexey Shved. Timma (26 points) played a valuable role in the win, but the Russian guard’s all-around play: 22 points and team-high seven rebounds and 11 assists make him the star of the game.

Quotes
Khimki head coach Rimas Kurtinaitis: “I’m happy about the win. It was a very important result for us. Everyone knows the standings in the VTB League. Right now we want to win the rest of our games since we’re competing for second place, which is only possible by winning. Today we were probably favored, but this was not an easy win because Astana is playing very good basketball this year. They have a very dangerous team and all of the players know exactly what to do. Even though the rotation is short, every player can hit a three in transition, which we saw today. I want to thank my players for their effort on defense and especially point out the rebounding battle. Today, we finally won on the glass, and by 15, which was the primary criteria that helped us win.”

Astana head coach Emil Rajkovic: “Congratulations to Khimki on the win. Over the final five minutes, they were more focused and surpassed us in many ways. We had issues with foul trouble, since Grosselle and Zhigulin both fouled out and Horton twisted his ankle during the game and played injured the final seven-eight minutes. As a result, our rotation had to adjust and we were forced to play a four at the center position and our small forward, O’Brien, at power forward. We tried different combinations and played zone defense. It worked some of the time. Until the final five minutes, we played well and kept it close. My players did a good job, so I don’t see any reason to be upset. We played our best, especially given issues with injuries and fouls. We’ll keep moving.” 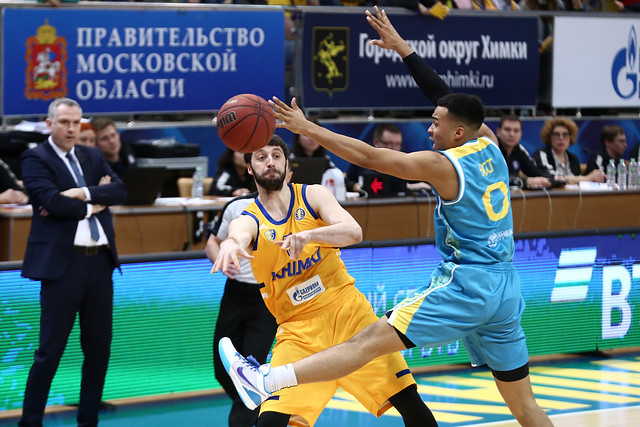