Face to Face
The rivalry between these two legendary Russian sports brands has limited history on the basketball court. CSKA and Zenit have played nine times with the Army Men winning seven. Intrigue
CSKA is playing extremely well entering Sunday’s contest. The Army Men won twice in the EuroLeague this week, defeating Khimki and Bayern. CSKA also has a 13-game winning streak in the VTB League and would like to make it 14 vs. Zenit.

Zenit’s situation is not as rosy. The transition under new coach Joan Plaza has hit a few bumps in the road, with St. Petersburg going 1-2 to start the EuroCup Top 16, including a loss at home to Andorra on Tuesday. The team has played better in the VTB League with wins over PARMA and Nizhny Novgorod boosting its record to 7-6, but upcoming games vs. CSKA and Khimki could drop Zenit squarely into the scrum for the final playoff spots.

Defeating CSKA would validate Zenit’s new direction under Plaza and give the team confidence. The Army Men, on the other hand, are focused on securing a win and taking another step toward clinching a regular-season championship.

Minus Both Karasev’s
St. Petersburg has made big changes since losing to CSKA in the Final Four in June. Perhaps most significantly, this will be the first game between Zenit and CSKA that will not include one of the Karasev’s: Vasily or Sergey. The former CSKA guard is now the ex-Zenit boss, while his son will miss Sunday’s game because of a foot injury. 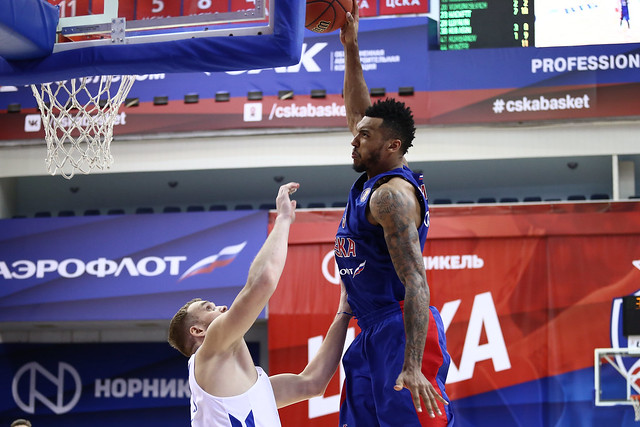 Joel Bolomboy. The center had to wait until midway through the season to play for the Army Men and still has to fight for minutes on a loaded CSKA roster. But when he does play, he’s been very effective. So far, Bolomboy has put up solid numbers in two games vs. VEF (15 + 6, 14+ 6), Enisey (22 + 8) and for the Russian national team vs. the Czech Republic (15 + 6). He also had an opportunity to shine in the EuroLeague, recording nine points and four rebounds in 12 minutes vs. Bayern. Teammates and coach Itoudis both praised his contributions. Perhaps he’ll also have a chance to show what he can do vs. Zenit.

Familiar Faces
Zenit captain Evgeny Voronov is well-known to CSKA fans from his stint at the club in the 2000’s. The ex-Army Men will likely be matched up with Cory Higgins, who spent the 2013-14 season as the leader and #1 scoring option at Zenit’s predecessor club, Triumph Lyubertsy.

Quotes
Zenit head coach Joan Plaza: “I know that Zenit defeated CSKA at home in each of the previous two seasons. Of course, I’d like to repeat that result. I don’t need to explain to anyone how strong the Army Men are. I can guarantee our fans that we will battle. For us, playing CSKA is like climbing a summit. Against opponents like this, you can only win if you play at a high level for the entire 40 minutes.”

CSKA head coach Dimitris Itoudis: “Zenit recently switched coaches, which means there have been a lot of changes to their system, both on offense and defense. We have a lot of respect for Zenit. It’s a team with a lot of talent and they play aggressive. It’s never easy vs. them on the road. We continue to plow through a busy schedule. After a busy week, we’re opening a three-game road trip. After St. Petersburg, we visit Barcelona and Minsk. We continue to work on our play at both ends of the floor. I’m confident it will pay off.”