Story
Enisey jumped out to a double-digit lead in the first half and never looked back, reinserting itself into the playoff race with a valuable road win in Poland.

The Russian visitors used balanced scoring (four players in double digits) and stingy ball security (only five turnovers) to exploit another cold shooting night from Zielona Gora (24-60, 40% from the field).

Zielona Gora, coming off a rout of PARMA last week, began the game on a 7-0 run and led much of the 1st quarter.

But Enisey ended the period on an 8-2 run, including a 3-pointer from Denis Lukashov at the buzzer.

Krasnoyarsk built on the momentum in the 2nd, surging ahead by 11 thanks to back-to-back 3’s from D’Angelo Harrison, 34-23.

Not much had changed at halftime as the visitors enjoyed a 44-33 advantage.

But the home team never got any closer.  Enisey tightened up its defense, allowing only three points over the final three minutes of the period and entered the 4th quarter with a 65-57 lead.

Zielona Gora simply ran out of offense down the stretch, falling behind by 16 as Enisey knocked down three triples early in the quarter to put the game away.

With the victory, Krasnoyask improves to 6-9, only one game back of Avtodor for the final playoff spot. Zielona Gora drops to 3-10, tied with PARMA for 11th place.

Stat
41 – Enisey attempted a remarkable 41 three-point field goals and won despite knocking down only 11. The 41 attempts ranks 2nd all-time in the League. 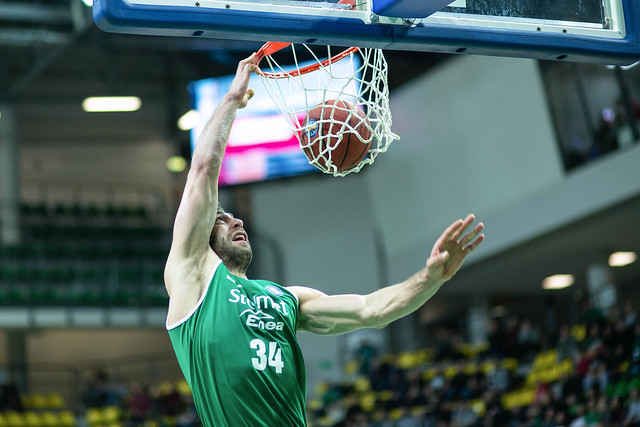