Story
Enisey never trailed in a nine-point win over 6th-place Astana at home. Led by D’Angelo Harrison’s 17 points, Krasnoyarsk took control early in the 3rd quarter en route to its fifth victory of the season.

Astana has now lost three in a row to drop out of the top five. The visitors struggled to match Enisey inside, getting outscored 48-36 in the paint.

Krasnoyarsk jumped out to a 13-point lead in the 1st quarter (23-10), forcing Astana to play catch-up early and often.

Trailing by nine at halftime, the visitors gave up a 10-0 run early in the 3rd quarter that more or less decided the outcome. Russian big man Igor Kanygin was instrumental in the run, scoring five straight points, including a three-point play, before Artem Komissarov knocked down a 3 that made it 65-48.

Once again, Astana closed the gap at the end of the quarter, this time to 10 (72-62), but the outcome was never in doubt. Enisey scored seven unanswered to begin the 4th quarter and put the game out of reach.

Stat
4 – Four of Enisey’s five wins this season have come at home.

Quotes
Enisey head coach Oleg Okulov: “We prepared for this game for a long time, but we made to make adjustments to the game plan because of injuries to Lavnikov and Meiers. Astana is playing well this year. They have good team chemistry and we expected a tough game. But today we had the advantage because we played extremely well on offense. The guys did a great job!”

Astana head coach Emil Rajkovic: “We lacked focus today. I think every player struggles at times on offense, if they aren’t in a rhythm or their shot isn’t dropping, but today our primary issues were on defense. We will analyze the situation and keep working.” 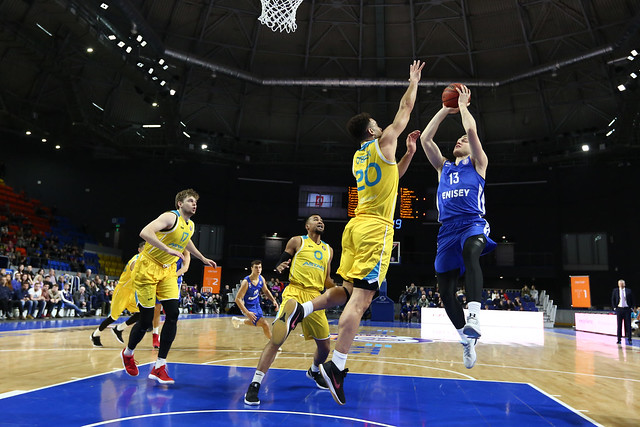