Astana was one of the season’s biggest surprises and head coach Emil Rajkovic is a candidate for Coach of the Year. In an exclusive interview with VTB-League.com, the Macedonian boss talked about his relationship with CSKA head coach Dimitris Itoudis, listed several advantages to living in Kazakhstan, and shared what he’d do if he takes the team to the VTB United League semifinals.

– You became a coach at age 27. What was your career path?
– As a player, a lot of coaches told me that I had a good understanding of the game and everything you need to start coaching. At some point, I decided that I wanted that path. I started preparing to be a coach and by age 27 already had a job.

– What’s your connection to Dimitris Itoudis?
– Several years ago, when I was coaching in Macedonia, I was simply amazed by the way Panathinaikos played. I liked how they played on defense, moved the ball and helped players develop. The Greek club was coached by Zeljko Obradovic at the time, while his assistant was Dimitris Itoudis. At a certain point, I was lucky enough to invite them to a coaching seminar and get to know them better. I learned a lot in conversations with them and received a lot of valuable advice. After that seminar, we stayed in touch and this season I had the unbelievable opportunity of competing in the same league with Dimitris Itoudis. I hope that I’ll also have a chance to meet Zeljko Obradovic soon.

– Did you have other offers this summer besides Astana?
– I could have stayed in Poland, plus there was another offer from a different VTB League team, but I decided to choose Astana because my agent Stanislav Ryzhov advised me to specifically join the Kazakh club. After several months, I can say that I absolutely made the right decision last summer!

– Kazakhs have a reputation for hospitality. How were you welcomed at Astana?
– I received a very warm welcome. I had the feeling I had come home. People in Kazakhstan really are very kind, respectful and warm-hearted.

– What was your biggest surprise when you first arrived in Kazakhstan?
– I wouldn’t say anything surprised me. Before my arrival, I was aware of the local climate and a lot of other things. Although, I’m still amazed at how cold winter is in Kazakhstan. I really like to be outside, but it’s impossible to spent much time outdoors in January and February in Nur-Sultan.

– Russian teams sometimes have trouble when players don’t speak English. Was that an issue at Astana?
– No, everyone knows English on our team. If there are any struggles, we have no problem finding a solution. After all, Russian and Macedonian are somewhat similar. But that happens very rarely because we use the language of basketball most of the time. For example, every player at this level understands words like screen, pick-and-roll, dribbling and crossover. 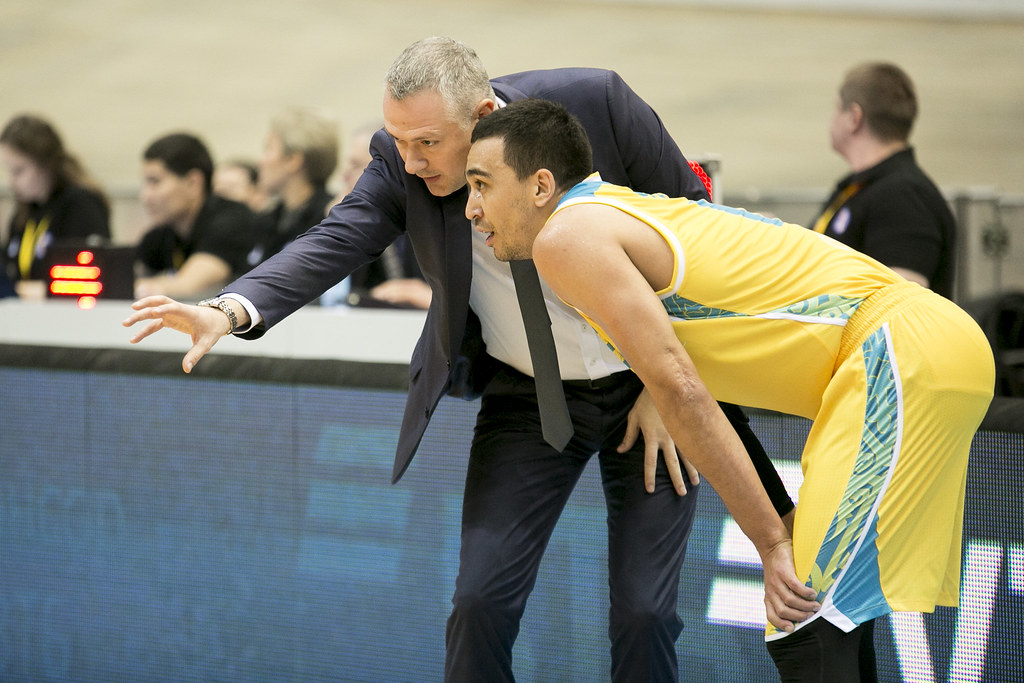 – Maybe there are some other issues at Astana?
– To be honest, there are none at all. Thanks to wonderful people, I quickly adapted at the club and have felt very comfortable ever since.

– Are the long flights a challenge?
– I’d only call it a problem if we weren’t professionals and weren’t being paid for this. But in our case, there’s nothing to complain about. Especially since the clubs that fly to visit us experience the same challenging itinerary.

– What role did you play in the mid-season acquisitions?
– I chose Michael Jenkins and Stephen Holt. The club’s general manager Valery Tikhonenko approved my choice, so there were no issues signing the players. It’s encouraging that both players that came during the season have adapted wonderfully to the roster.

– Astana still only has one center on the roster: Geoffrey Grosselle. Could that be a problem in the playoffs?
– Of course, that has been our biggest issue throughout the season. But we keep trying to find a way out of a tough situation. Sometimes, Alexander Zhigulin or Dmitry Gavrilov plays center, while 201-cm tall Ken Horton was the center in the win over UNICS. If we had one more classic center on the roster, it would be a lot easier to compete with the VTB United League’s top teams.

– Has Valery Tikhonenko given you any advice during the season?
– Valery Tikhonenko has given me full freedom throughout the season and always supported me, for which I want to thank him. This man reached great heights as a player and coach. Now, with that unbelievable experience, he’s showing his talent as an executive. He knows when to help someone with advice and how to relate to people. Valery Tikhonenko is without question the best general manager I’ve ever worked with.

– Which game in the regular season left the biggest impression on you?
– Our road games vs. Loko and UNICS. We managed to beat big-name opponents on their courts. Those were unquestionably Astana’s two best games of the season. The meeting with Zenit also might have made the list, but, unfortunately, we got a little unlucky at the end. 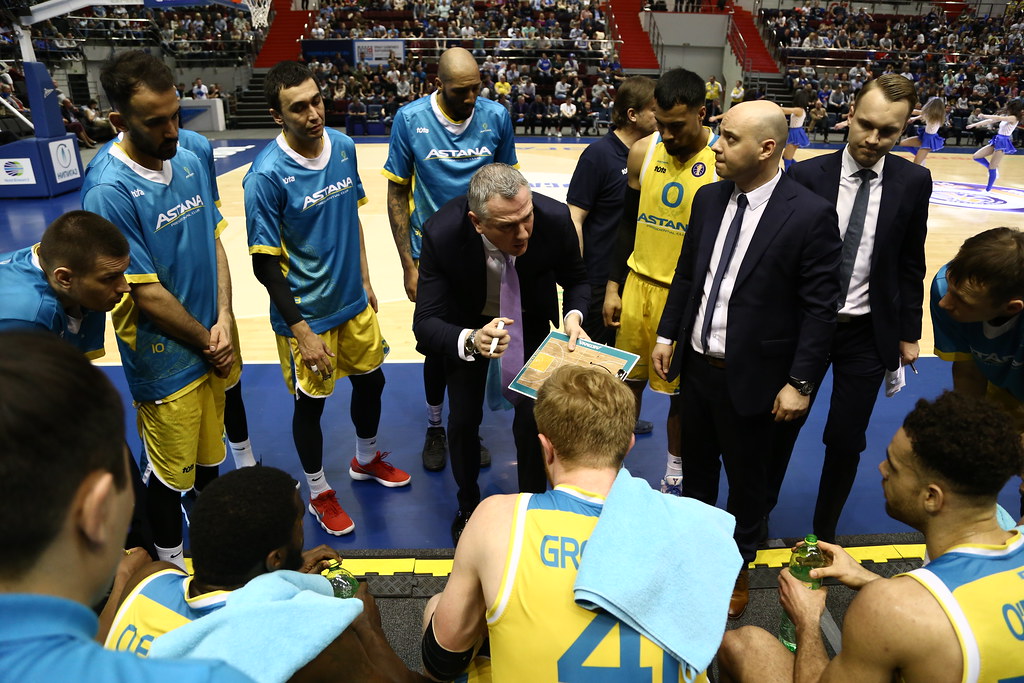 – Are you happy with 6th place in the regular season?
– Of course! We won 15 games and posted the best record in club history. We beat Loko and UNICS on the road. If someone before the season had told me that we would finish the regular season in 6th place, I wouldn’t have believed it.

– Are you ready to do something crazy if Astana reaches the semifinals or the finals?
– No, why would I? I’m better off doing what I always do after a win: Wake up the next morning in a good mood, make a cup of coffee and feel like the happiest person on the planet.

– What’s your opinion on Astana’s poor attendance at home games?
– I always bring it up. It’s really frustrating to me that our guys don’t get the support they deserve, especially in a historic season. At the same time, I understand that soccer and hockey are far more popular here than basketball. I’m happy that the attendance increased towards the end of the regular season. For example, we had almost 2,000 people show up for the game with Enisey. I hope most of those people will be in the stands for the playoffs, too.

– How do you spend your free time in Kazkahstan?
– My wife, two daughters and dog live with me in Nur-Sultan. I try to spend all of my free time away from basketball with them. I’m very happy that I don’t have to miss them and feel lonely.

– Do you follow your players on social media and see what they’re up to?
– No, I don’t need to. If I need something, I can always call a player and talk to him. We have excellent relationships. We are open with each other.

– Kazakhstan is famous for its cuisine. Have you tried it?
– Yes, I’ve been able to try a lot of the local food. I haven’t drank kumis yet, though. All of the dishes are interesting and tasty, but I liked the horse steak and beshbarmak (boiled mutton with noodles) the best!

– What do you like about Kazakhstan more than Macedonia?
– You can find positives anywhere. For example, it’s very cold in Kazakhstan, but that’s not always a bad thing. When it’s -40 degrees, all of the bacteria die so there are no viruses. Throughout the entire season, not a single player has been sick with a virus. And, of course, the best year of my coaching career so far has come in Kazakhstan.