Story
CSKA was tested by eight-seed Nizhny Novgorod, but ultimately pulled away down the stretch for a second straight win and a 2-0 series lead.

The Volga visitors got as close as five, 58-53, late in the third quarter, courtesy of a 9-1 run. Timofey Gerasimov and Artem Komolov knocked down 3-pointers and Nizhny held CSKA to only a free throw over four minutes.

Daniel Hackett, who scored a team-high 15, provided the answer for Moscow, knocking down two triples to bookend a 13-0 run for CSKA that stretched into the fourth quarter.

Not surprisingly, CSKA relied on its superior depth to wear down an injury-ravaged Nizhny. The Army Men reserves outscored their counterparts by 20 (49-29), led by Joel Bolomboy’s near double-double (11 points, nine rebounds).

Nizhny, which trailed the entire contest, enjoyed impressive games from Anton Astapkovich (17 pts) and a career-high 14 for Timofey Gerasimov. But the visitors also gave the ball away 20 times and was outscored by 14 in the paint, overpowered by CSKA’s size and defensive pressure.

The series moves to Nizhny Novgorod on Thursday for Game 3.

Shot of the game

Quotes
CSKA head coach Dimitris Itoudis: “Congratulations to the team on the win and a good game. We’re up 2-0 in the series. We accomplished the first part of our goal with two wins at home. Now we’re headed to Nizhny Novgorod. We have two days to prepare, although we have other responsibilities, too. I’m happy we kept battling and maintained the same level of intensity. Plus, Nando De Colo is back and we gave him enough playing time to regain his rhythm.”

Nizhny Novgorod head coach Zoran Lukic: “My team played much more attractive basketball today, no question. Unfortunately, we missed a lot of open shots when we were in good position, including 1-0 situations under the basket. We didn’t hit our free throws, even our snipers missed. You’ll see: Players like Rodriguez don’t miss when they’re open. Unfortunately, we didn’t have enough of those shots.” 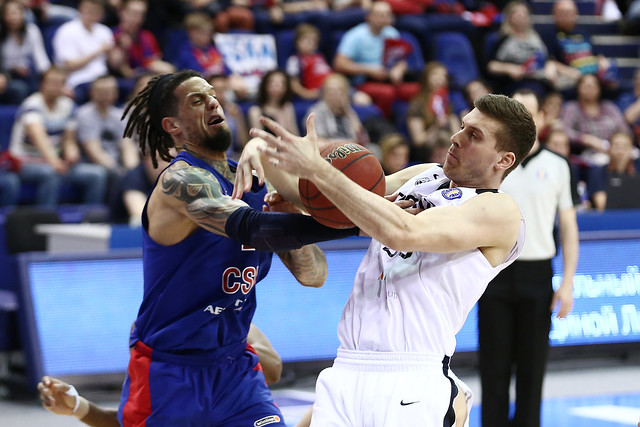