Story
Astana found redemption after a disappointing performance in Estonia, crushing visiting Tsmoki-Minsk by 30 points to secure its 13th win of the season.

The game, however, was close until late in the 3rd quarter as the visitors weathered several Astana runs to keep the deficit to five, 44-39.

Vladimir Mihailovic, who finished with a career-high 23 for Minsk, hit a pair of buckets late in the first half that helped trim Astana’s lead from nine.

Mihailovic was not done, scoring the first five points of the second half to knot the score at 44-44 and 10 points by the midway mark of the 3rd quarter, keeping the visitors within reach, 55-51.

Astana finally began to pull away as Michael Jenkins’ 3-pointer gave the home team its first double-digit lead, 62-52, with 3:30 remaining in the period.

A 6-0 run to end the quarter, meanwhile, effectively put the game away. Jenkins hit another triple and the Kazakhs cruised into the 4th quarter with a 74-59 advantage.

Tsmoki’s offense faltered down the stretch, scoring just 12 points in the final period, which resulted in a lopsided final score.

This was a crucial win for Astana. After Lokomotiv-Kuban’s loss to UNICS, the Kazakh club is within half a game of 4th place and home-court advantage in the first round.

Tsmoki drops to a League-worst 2-16 with the defeat.

Stat
+24 – Astana’s advantage in second-chance points. The home team dominated the glass (42-28) and punished the visitors with second-chance opportunities.

Quotes
Astana head coach Emil Rajkovic: “I’m satisfied with my team’s play. It’s important that we won by a lot today. We had a bit of an emotional letdown after the loss to Kalev. I think today’s win virtually guaranteed a spot in the playoffs. We are viewed as this season’s biggest surprise and we truly have shocked several big teams. Now it’s time to play really good basketball, since the important games are almost here.”

Tsmoki-Minsk Rostislav Vergun: “Congratulations to Astana on the win. Good luck in the hunt for a top seed and later in the playoffs. Today, we were probably victims of a limited rotation. We only had nine players ready to play today. At a certain point, we lacked the necessary energy and aggressiveness. Astana used its deep rotation to get the lead, which it protected.” 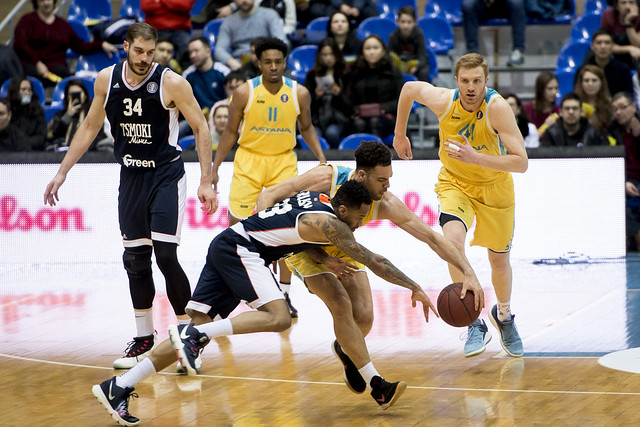