Story
Enisey kept its slim playoff hopes alive with a tense 70-68 win in the Latvian capital. D’Angelo Harrison was the hero down the stretch for the Russians, draining a go-ahead 3-pointer then sinking th game-winning free throws with 20 seconds remaining.

Thanks to a Krasnoyarsk turnover, the home team had two chances to win the game in regulation, but Glenn Cosey and Jabril Durham both missed from beyond the arc and likely buried VEF’s postseason hopes in the process.

The game featured 12 lead changes and eight ties with both clubs desperate to secure a win. The high stakes did not translate to much offense. VEF and Enisey both shot under 50% from the field and 30% from beyond the arc. VEF struggled especially to move the ball, recording just 13 assists as a team.

Enisey recovered with 11 straight points from Michael Bruesewitz to take a 53-50 lead late in the quarter.

Neither team led by more than three points in the 4th quarter as Enisey escaped with its third-straight victory.

The Russians are now 9-14, tied with Avtodor for 9th place and one and a half games behind Kalev (10-12) for the final playoff spot. VEF drops to 8-16 and would need a miracle to make the postseason.

Stat
3 – number of games remaining for Enisey. The Siberians go on the road to Astana and Khimki, before wrapping up the season at home vs. Avtodor. Because Kalev holds the tiebreaker, Enisey either needs to win out or hope the Estonians lose their final four games.

Quotes
VEF head coach Janis Gailitis: “Tough loss. Today we didn’t have a leader who could bring us a win. We also missed some big shots at the end.”

Enisey head coach Oleg Okulov: “We showed character today and won, but it was a tough game. In any case, we were a little luckier. The players were very tired and made a lot of mistakes. But I’m proud that we really wanted to win and were able to do it.” 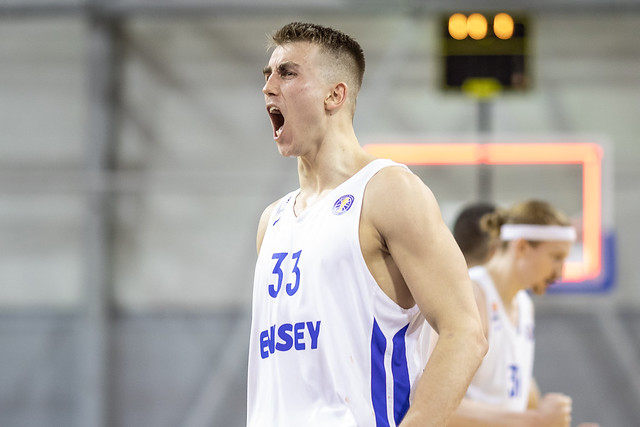