Story
Khimki decimated Zenit at home, 90-67, with blistering 65% shooting from beyond the arc. Tony Crocker and Jordan Mickey each scored 20 for the home team, which raced to a 30-15 lead in the 1st quarter before erasing Zenit’s comeback hopes in the 3rd quarter.

Both teams suffered surprising losses a week earlier. Zenit even made a switch at head coach, bringing in Joan Plaza to replace long-time boss Vasily Karasev.

Plaza will have a lot to chew on after this defeat as his team shot 41% from the field and got out-rebounded 35-24.

Jalen Reynolds was the lone bright spot for the visitors, recording 16 points and eight rebounds to go with three blocks in the defeat.

Khimki wasted no time seizing control, scoring the first eight points of the game, including a back-to-back 3-pointers from Crocker and Malcolm Thomas.

Zenit rallied briefly at the end of the first half. Reynolds scored nine of St. Petersburg’s final 11 points in the 2nd quarter, helping cut the deficit to 11, 47-36, entering the break.

Khimki, however, slammed the door shut in the 3rd quarter, opening the period on a 10-2 run capped by a Jordan Mickey dunk.

The visitors only scored eight points in the quarter and trailed 70-44 entering the 4th quarter, allowing the home team to cruise the rest of the way.

Moscow Region is now 10-1, half a game back of 1st-place CSKA. Zenit remains in 6th place with a 5-5 record, but only one game ahead of 9th-place Nizhny Novgorod.

Stat
13 – Khimki drilled 13-pointers on only 20 attempts. It’s nearly impossible to overcome that type of accuracy.

👌 Khimki was unstoppable today from beyond the arc – 13/20 3-PTS! pic.twitter.com/ZeRnwiihrK

Quotes
Zenit head coach Joan Plaza: “It’s hard to make any big changes when you’ve only been with the team two days and held two practices. We have a lot of injured players with several guys out, which has caused a lot of problems. But journalists who know me, know that I never look for excuses. The situation today is that Khimki is better than us. They completely deserved this victory and I congratulate them on it. They played better on the glass and shot a high percentage from beyond the arc. We didn’t manage to stop their three-point shooting even after talking in the locker room where we pointed out that it’s one of Khimki’s strengths. We also made several serious mistakes, which in the end prevented us from catching our opponent. We need to learn from these games. We have a week to prepare for the next game and even if we aren’t able to get our injured players healthy, I hope we can look different.”

Khimki head coach Georgios Bartzokas: “This was a very important game against one of our rivals for a top seed. We played serious basketball on defense and offense, but especially on defense. We were focused on the game plan and stopped their key players. On offense, we were creative and had 10 more assists. We also had 10 more possessions thanks to rebounding. All of this helped us win by such a big margin. We’re trying to survive a challenging schedule since we have another game in three days. In any case, we picked up a big win and played pretty basketball. Congratulations to the players and fans.” 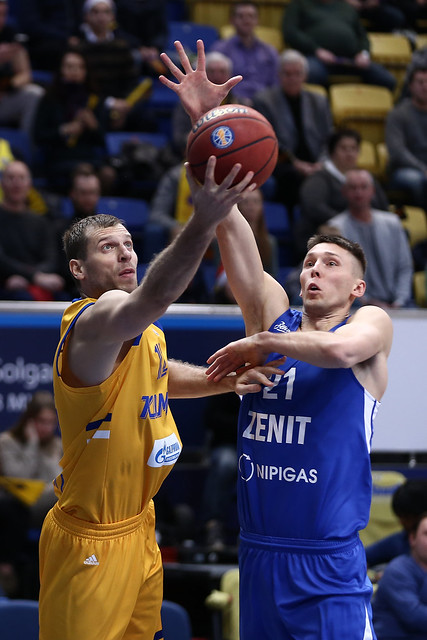